10 Faces of The Trumpet 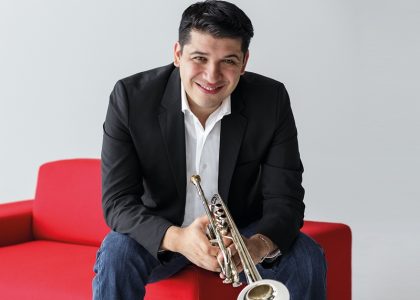 “Every time Pacho Flores goes out onto the stage, it’s a real sensation. The trumpet is his voice, revealing the performer’s essence”, say music critics.

The stops along the performer’s concert tour routes testifies to the fact that these are not just empty words (Carnegie Hall in New York, Salle Pleyel in Paris, and the Tokyo Opera Concert Hall), as does his impressive list of stage partners. It features the names Claudio Abbado, Sir Simon Rattle, Gustavo Dudamelis, plus many more.

For his appearance in Vilnius Flores is bringing along ten (!) trumpeters, seeking to give each work its own sound and different colours: “this is a very flexible instrument. It can sound like the human voice, the violin or oboe… After all, when playing and listening, what’s most important is to dream”, says the performer.

Pianist Ieva Dūdaitė, who is taking the stage with him, agrees, adding that audiences are in store for a colourful evening moving to the beat of Latin American rhythms.