Both Sides of the Ocean. Chamber Music of Lithuanian Diaspora 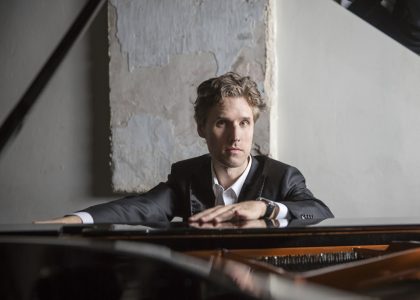 Programme designed and compiled by Gabrielius Alekna and Linas Paulauskis

The legacy of Lithuanian composers, who found themselves on the other side of the Atlantic by the twist of fate, is a significant and valuable part of our cultural and historic heritage. Admittedly, returning at a very slow pace to the Lithuanian cultural realm torn by historic collisions, it is still a rare guest at the concert stages today. The Lithuanian emigration to the other side of the ocean, in particular the USA, dates to the 19th c., however, the most painful scar on national culture was made by emigration wave in the aftermath of the IIWW and the pacts between the Soviet Union and Germany. According to historians, more than 60000 Lithuanian residents decided to flee to the West in fear of possible repressions. Among them was a great number of intelligentsia and cultural figures. In addition to singers, orchestra musicians and music teachers there were many composers including Kazimieras Viktoras Banaitis, Julius Gaidelis, Vladas Jakubėnas, Jeronimas Kačinskas and Giedra Nasvytytė-Gudauskienė. One of the foremost Lithuanian personalities of the interwar period was Vytautas Bacevičius, a composer, pianist and publicist who was one of the most instrumental individuals in promulgation of contemporary music. He was one of the initiators of Lithuania’s becoming a member of the International Society for Contemporary Music (ISCM) in 1936, the only one from Baltic States. In summer of 1939, Bacevičius went on concert tour in Argentina. When the IIWW broke out, he did not return to Lithuania occupied by the Soviet Union and became an emigrant. In 1940, he settled in the USA.

According to musicologist Danutė Petrauskaitė, even though in the late Soviet period some musicologists and performers showed interest in the output of emigrants, their music was seldom performed in Lithuania. It was with Sugrįžimai festival dedicated to the music of the diaspora and launched in the beginning of Sąjūdis (the Reform Movement of Lithuania) that the forgotten music started entering concert stages in Lithuania; articles, research works and monographs on the diaspora composers were published.
Pianist Gabrielius Alekna is a champion in the promulgation of Lithuanian exodus music. A graduate of Juilliard School in New York, he is considered to be a true expert of Lithuanian emigrant composers, in particular Vytautas Bacevičius. Alekna’s PhD of Arts dissertation on unprinted piano works by Bacevičius was awarded the Richard F. French Prize as the Juilliard School’s best dissertation of the year and was accompanied by the release of Alekna’s two-volume compilation of previously unprinted works by the composer (publ. by the Lithuanian Music Information Centre). His dedication to promote work of Bacevičius music resulted in the pianist recording CDs (Naxos, Toccata Classics), collaborating twice with Grammy Award producer Judith Sherman and four-time Grammy nominated pianist Ursula Oppens. On his initiative, the five-time Grammy nominated conductor and composer Christopher Lyndon-Gee (Australia, Italy) has joined the project focusing on a release of Bacevičius’ music.

For this concert of chamber music of Lithuanian diaspora pianist Alekna has gathered together outstanding performers: violinist Justina Auškelytė, a winner of second prize at the Third Jascha Heifetz Competition for Violinists, Master of Music from Juilliard School in New York, debutante at the Musikverein in Vienna; baritone Modestas Sedlevičius, a winner of second prize at the Virgilijus Noreika Competition, a scholarship student at La Scala Theatre Academy in Milan; soprano Dovilė Kazonaitė, an acknowledged hope of the opera in 2017; pianist Onutė Gražinytė, a student at the Hanover University of Music, Drama and Media, scholarship holder of the “Musik Braucht Freunde” and Lord Yehudi Menuhin’s “Live Music Now” foundations; the Vilnius String Quartet, an advocate of Lithuanian music, recipient of the Lithuanian National and the Baltic Assembly prizes; the Woodwind Quintet, uniting the leading Lithuanian musicians.