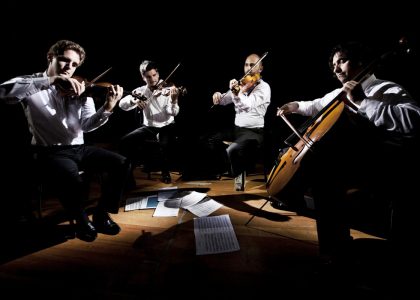 Cremona Quartet formed in 2000 while its members were studying at the Walter Stauffer Academy in Cremona. The Quartet made a name for itself as one of the most interesting chamber ensembles on the international scene. It has performed in the most prestigious concert venues all over the world such as Wigmore Hall in London, the Konzerthaus in Berlin, the Beethovenfest and Beethovenhaus in Bonn, Barge Music in New York; toured in Europe, the USA, Australia, Japan, China and Mexico.

The Quartet’s repertoire ranges from the early quartets of Haydn to Wolfgang Rihm and Helmut Lachenmann’s opuses, with special focus on Italian music (Fabio Vacchi, Luciano Berio, Luigi Nono). Radio and television stations around the world (such as RAI, WDR, BBC, VRT, SDR, ABC) regularly broadcast the Cremona Quartet concerts, while the press praise their interpretations. “Dynamic contouring was as sleek and elegant as an Armani suit, and it tailored the music to perfection”, wrote the British magazine The Strad.

Active for five years, Mettis String Quartet is often referred to as young and ambitious. According to Simone Gramaglia, the ISA (Austria) pedagogue and a member of the Cremona Quartet, this ensemble justified the Lithuania’s prestige as a country retaining high string quartet culture. Last summer, the Quartet became a member of the elite European Chamber Music Academy (ECMA). Metis is a Greek mythological figure, the wife of Zeus, a symbol of wisdom. In colloquial Greek this word denotes quality achieved by cleverness, cunning and skill.

Formed under Prof. Augustinas Vasiliauskas at the Lithuanian Academy of Music and Theatre in 2011, Mettis Quartet is a winner of numerous national and international competitions, regularly takes part in various music projects, master classes, festivals; its members often appear as soloists.