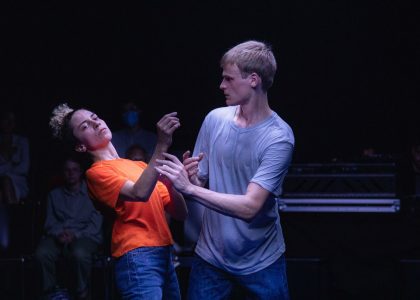 After her first performance presented in 2020, Anna-Marija Adomaitytė continues to research the standardisation of gestures and the endurance of the body. workpiece focused on the body at work in fast-food restaurants. Pas de deux moves the study of their resistance within the norms of heterosexual love. On a deep blue floor, a woman and a man perform the gestures of a couple. The surrounding audience hear their breath quicken, perceive an impatient hand, a fading gaze… One suspects evasion in these frantic movements transfigured by exhaustion, which jeopardise the pas de deux itself. Like a gust of wind on all-powerful romanticism, Adomaityte’s Pas de deux takes the duo out of programmed madness.

This year Pas de deux has been selected to be part of the European dance network Aerowaves.