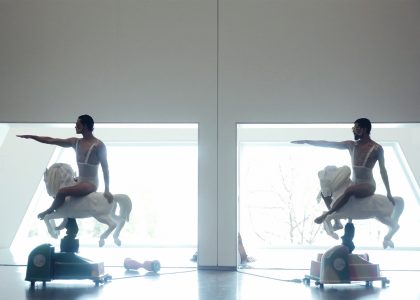 Coin Operated is a performance installation created for unconventional spaces, where the dialogue with the public is direct and the continuity of the performance depends on the dynamics of that same dialogue. The mutation between installation and performance occurs through an audience that is invited to insert €1 coins into the slot of two horses where Jonas and Lander are sitting in asphyxiating immobility. From that moment, when the connection between horse and coin takes place, the installation ends and the performance begins. With this work, Jonas & Lander give spectators a new role, in which they participate in action dynamics and consequences, celebrating an unexpected dialogue each time.

Jonas and Lander have been contributing to each other’s imagination since the beginning of their collaboration in 2011. They stand out with Cascas d’Ovo, the project that took them to several national and international venues. In 2014 and 2017 they were distinguished as “Aerowaves Priority Company”. In 2018, they focused on Lento e Largo, a performance co-produced by Rede 5 Sentidos, Teatro do Bairro Alto and Teatro Freiburg (AL), nominated by SPA for the Best Choreography category of 2019.