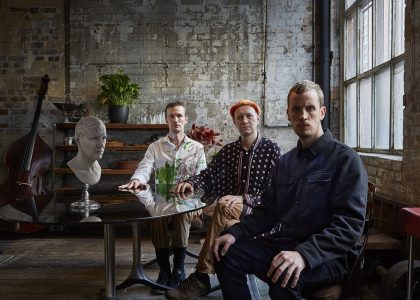 For the fans of the classical jazz sound inspired by the talent of Charlie Parker, Vilnius Mama Jazz Festival offers a performance by the British pianist Django Bates and his group Django Bates’ Belovèd on 13 November.

Described as one of the most talented British jazz musicians Django Bates is a composer, multi-instrumentalist and mentor. He formed his group in 2005 at the Rhythmic Music Conservatory in Copenhagen. At that time he heard bassist Petter Eldh and drummer Peter Bruun, and although he was critical about the trios led by pianists, the talent of these two young musicians convinced Bates, who an established musician, to take on a new project.

The name of Django Bates became known in the world of jazz back in 1980s, when he established the group Human Chain and lent his instrument to the jazz orchestra Loose Tubes. During his career spanning almost 40 years Bates has played with the group Yes, drummer Bill Bruford of King Crimson, South African saxophonist Dudu Pukwana, US pianist and theorist George Russell and winner of 15 Grammy Awards saxophonist Michael Brecker.

The new project with the Danish musician Bruun (Enemy, Speak Low, Amok Amor) and the Swedish musician Eldh (All Too Human, Samuel Blaser Trio) combines the rules of classic jazz, unpredictability and a certain net of tranquillity.

Despite the group’s preference for improvisation, from the first note the musicians do not dive into the sonic madness of freedom controlled solely by power and personal mastery. Constantly floating piano ripples constrain the free-wheeling chaos under a strong hand of the master.

The music of Django Bates’ Belovèd is timeless, with a touch of acoustic reveries of the 1950s and modern experimental dissonances, which Bates envelops in a discreet gentleness to prevent an onslaught of sounds.

If you are inspired by street lights reflecting in a puddle at night and Charlie Parker’s velvety sound, Django Bates’ Belovèd is right up your street.

The project is supported by Lithuanian Culture Council.