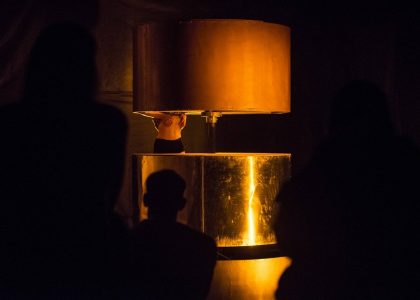 The idea for this piece first came after seeing a short movie ”Tornado” by Francis Alys. While the tornado unfolds and gradually approaches, the protagonist with the camera in his hands keeps geting closer to the tornado and eventually ends up inside it. This piece is about a particular feeling that there’s always something bigger than us. Two bodies in the space – one human and another one made by humans to remember. A Duet that happened.

Ula Liagaitė, born in Lithuania, in 1991, is a 26-year-old dancer, actress and performer. She received her bachelor’s degree as a contemporary dancer at the ”Northern School of Contemporary Dance” in Leeds. Since 2014 Ula has been training as a performer at a space dedicated to the promotion and development of moving and performing arts called LEM in Buenos Aires, Argentina. And since 2017 she’s part of the ”La Otra” dance company, directed by Viviana Iasparra who is one of the founders of LEM. She started working with her sister Bartė Liagaitė and Video-audio artist Mikas Zabulionis in 2015, for a project Movement to Movement, during which seminars of movement and physical training techniques for actors and dancers were presented as well as a work-in-progress of a performance then named ”Duet”.

Bartė Liagaitė was born in 1992; she’s a performing arts manager and set designer. Bartė received her bachelor’s degree at the Lithuanian Academy of Music and Theatre. B. Liagaitė mostly works in managing different performing arts projects, but her interests are shifting towards more creative endeavours. Currently Bartė is working at Oskaras Korshunovas Theater with props and costumes. The scenography for the performance ”Duet” is one of her first attempts in realising her ides as a scenographer.

Mikas Zabulionis is a video-audio artist, born in Kaunas, in 1993. He has created sound for various performances by Ula Liagaitė and other Lithuanian theatre performers, performances and projects. Under the nickname Nobuma, Mikas has been developing his musical work for several years now. He studied animation at Middlesex University in London, England and works as a freelance video creator as well.