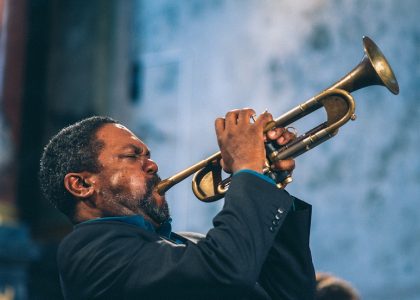 Whispers from within, from soul to folk

One of the best singers and multi-instrumentalists in Great Britain, Eska Mtungwazi, was bestowed with a wonderful talent that was revealed with all its power on her debut album ESKA. Nominated for the prestigious Mercury Award, astonishing the musical world with her voice and work, the performer is sure to delight the Christopher Festival’s audiences.

She is coming to Lithuania with a dream-team of instrumentalists, with trumpet player, composer and producer Byron Wallen heading the line-up. Even if you haven’t heard of his achievements or influence in the jazz world but watch Game of Thrones – then you’ll be seeing one of the creators of the series soundtrack right in front of you. The other members of the group, percussionist Rod Youngs and bass player Pauls Michael regularly play with the brightest jazz stars. While the young (24) guitarist Rob Luft is already today being compared to legends such as John McLaughlin, Al Di Meola and Paco De Lucia.

The performers have put together a program that is hard to define in any standard way. It is a mix of soul, jazz and folk music elements, creating a harmonious whole that music critics have termed “the classical music of the future”.

Program features D. Ellington, T. Monk and B. Strayhorn, plus original works by B. Walen and Eska