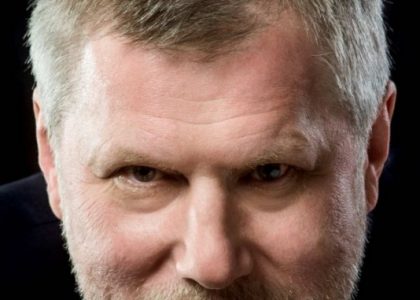 Concert to mark the 60th anniversary of composer FAUSTAS LATĖNAS, a recipient of the Lithuanian National Prize

Faustas Latėnas’ creative output amounts to over 200 works for theatre productions, as well as documentaries, feature and TV films in Lithuania and abroad, in addition to about fifty orchestral compositions and a large number of chamber music opuses. In 2015, the composer was awarded the Lithuanian National Culture and Art Prize for “The sounding Lithuanian theatre, and music as a worthwhile counterpart in theatrical action”. Latėnas is most noticeably infixed in the realm of theatre. Even his concert chamber music showcases theatricality – eloquent narration, emotions, ‘smiling through tears’. According to musicologist Viktoras Gerulaitis, Latėnas’ instrumental chamber music opuses constitute small musical spectacles where every musical gesture has a specific meaning often known to the composer only. He does not shun from banality or various reminiscences of familiar music, the strangest hypertrophied climaxes or provoking combinations. He is confident, that “to encode the inner tension one does not necessarily need many notes or sophisticated verbosity. It could be achieved with simple and known subjects, uncomplicated harmony.” In one of his interviews given earlier this year Latėnas admitted:” It seems to me that I already composed all my concert music. As majority of other composers, I wrote it before I turned 35-36. Later many of us only try to perfect what has been already written down. I do not complain – my concert music enjoys popularity to this day. And not only in Lithuania. Music for theatre fascinates me because when working on it I feel as if being on a life and artistic journey: new pieces, rehearsals, new actors, new ventures”. Thus, the concert dedicated to Latėnas’ 60th anniversary features his early works composed in 1977–1990, encapsulating the theatre spirit and passionate palette of Astor Piazzolla, presented by both long-time and younger performers of music by the hero of the day. The eventing’s highlight – one of his most known opuses – string quartet Šviesiam atminimui (In Loving Memory) arranged for symphony orchestra.