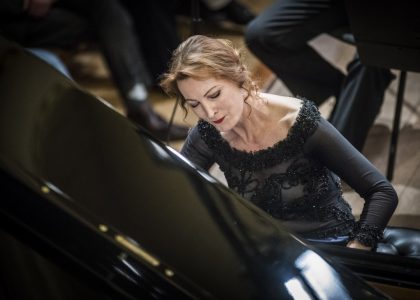 With the participation of DONATAS BAGURSKAS (double bass)

Piano Maestra Mūza Rubackytė teams up with Mettis String Quartet, one of the busiest young participants of the Lithuanian musical scene.

A recipient of the Lithuanian National Prize and the 3rd Class Order of the Lithuanian Grand Duke Gediminas, an internationally acclaimed pianist performs around the globe, gives recitals in the world’s most venerable concert halls. Rubackytė is the founder and artistic director of the Vilnius Piano Festival, serves as a professor at the Lithuanian Academy of Music and Theatre, leads master classes around the world. Each of Rubackytė’s concerts offers a singular opportunity to peak into her universe filled with rich artistic and life experience. It seems, she takes one by the hand and leads into unknown realms imbuing well-known compositions with unique meanings.

Formed in 2011, Mettis String Quartet involves four winners of numerous competitions regularly appearing as soloists, chamber musicians and members of orchestras as well as taking part in various music projects. Since 2014, Mettis String Quartet has been a member of the European Chamber Music Academy (ECMA). In 2015, the Lithuanian National Philharmonic Society released the Quartet’s CD Intromusica. In 2016, the ensemble appeared in the prestigious Wigmore Hall in London, earned second prize at the 8th Bordeaux International String Quartet Competition where it also was awarded a special prize. The same year Mettis won the 9th Vittorio Rimbotti International Competition in Fiesole (Italy). Autumn 2017, saw the Quartet giving eight concerts in China, while in the beginning of 2018 Mettis appeared in Laeiszhalle in Hamburg and Konzerthaus in Berlin.