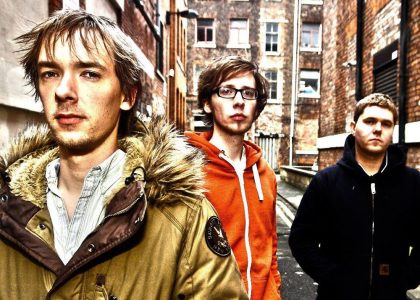 GoGo Penguin, one of the guests of this year’s Vilnius Mama Jazz, play music described as acoustic–electronica blended with jazz.

Although at first sight such description may sound like musical sacrilege, it would be difficult to provide a more accurate description. What the musicians play is rhythmic compositions keeping with jazz improvisational vibes.

Founded in 2012 by three students of the Royal Northern College of Music, the group caused quite a stir in the jazz world with their debut album Fanfares. In 2013, the album was nominated for the best jazz album at the Worldwide Awards curated by the cult British broadcaster Giles Peterson.

Following their success, in 2014 the group released their album v2.0, which was shortlisted for the prestigious Mercury Prize album of the year. Two more albums, Man Made Object and Humdrum Star, strengthened the positions of GoGo Penguin as masters of innovative yet easy to listen music.

The influential music news portal Line of Best Fit called the group “the Radiohead British jazz” and the New York Times wrote that the album Humdrum Star featured a hypnotizing and analytical contrast between the fixed, repetitive motifs and improvisational variations, and fluctuated between jazz and hip hop.

When you hear Chris Illingworth’s piano, Nick Blacka’ double-bass and Rob Turner’s drums live for the first time, you have doubts as to whether what you see on the stage is true, because it is real electronic music. However, drawing on Massive Attack, Underworld or Aphex Twin, the musicians of Go Go Penguin never forget jazz classics and adapt classical techniques in a new context.

These experiments give rise to the sonic identity, which accommodates Esbjörn Svensson, Nils Frahm or Ólafur Arnalds, classical improvisations, and elements of the music of end of the 20th century. But first and foremost you can feel a strange space created by this non-pretentious, free-flowing music as if its purpose were to represent the environment in which we live with notes.

Therefore take a deep breath and immerse yourself in the hypnotic music stream.

Portico Quartet which surprised the music world with its debut album Knee-Deep In North Sea a decade ago will be taking to the stage of Vilnius Mama Jazz.

With a mix of melancholic stylish jazz, electronic and minimalistic music the four musicians earned their place under the sun as performers admired by both serious snobs and popular music fans.

During 12 years of their career in the band, Duncan Bellamy, Milo Fitzpatrick, Jack Wyllie and Quot Keir have shared an impressive path from sharing accommodation with the creator of electronic music Jamie Woon, the Mercury Prize nomination in 2008 for the best album, and a contract with Peter Gabriel’s Real World Records all through to playing electronic music and working under the roof of Ninja Tune.

However neither the changes of the labels nor the group’s composition have altered the group and it returned triumphantly with its much praised fourth album Art in the Age of Transformation in 2017.

The group has managed to retain its contemporary sound combining ambient music and sax themes. On the one hand it is unpretentious music which does not raise many questions, yet it is also a testament to great harmony between musicians and ability to discover magic in simple things.

The group has always intrigued by their ability to exploit the hang drum, an instrument created just a mere 20 years ago. Yet they never abused it or tried to show their individual virtuosity, but rather let the music be in the forefront.

All of this gives rise to a very lively, but subtly delicate sonic picture with notes familiar to the fans of Radiohead, Cinematic Orchestra and Massive Attack. Let’s be clear that this is far from a traditional jazz sound, but, most importantly, it does not aspire to be the one.

Portico Quartet play music crafted from many musical elements, a kind of rain of sounds. Once you plunge into that rain, there are visions of neon lights and silky feel to your skin.

If you dare to wander into the rain of sounds, don’t be afraid of the trip, if you dare to close your eyes and surrender to the cool of the music, Portico Quartet will be your reliable navigator.

The project is supported by the Lithuanian Culture Council.