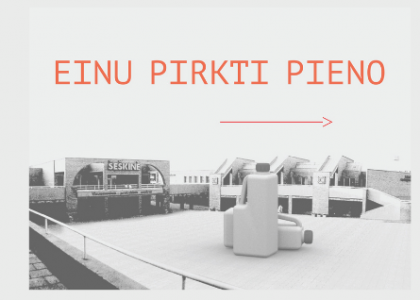 What can happen when buying milk in Šeškinė? Contemporary dance artists Greta Grinevičiutė,  Agnietė Lisičkinaitė and their creative team decided to take a look at an ordinary day in a seemingly ordinary neighbourhood to discover what turns our lives into a fairy-tale. Or to pose a question: how do we create fairy-tales in everyday life?

After breaking out of the vicious circle of the city and only exploring the Šeškinė district, fairy-tale motifs and fictional characters became a natural tool to try to understand, tame and capture the place. The archaic mystification of a foreign place also brought back childhood memories, when the neighbourhood was equivalent to the entire world. The fairy-tale also became important as a means of intergenerational communication, that is passing the old wisdom on to the young. In trying to create a fairy-tale of their own, the creative team realised that the motif of travel was not only appropriate but also inherent.

So, this journey of the fairy-tale begins, “Once upon a time, a hipster from the city centre moved to Šeškinė…”