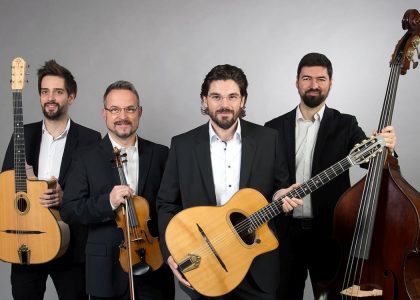 Even if you’ve read a hundred times just how wonderful Joscho Stephan is, you’ll only really understand once you’ve seen him in concert. Come in, sit down and buckle up! A fast and furious ride into the world of gypsy jazz awaits…

Breath-taking technique (one only a handful of the most famous performers can boast of), inborn musicality and strong stage presence have earned this guitarist the recognition of both the public and music critics alike. Guitar grands, such as T. Emmanuel, S. Rosenberg and B. Lagréne, have gladly participated in recordings of Stephan’s latest album Guitar Heroes.

The new coryphaeus of gypsy jazz, titled as the successor of Django Reinhardt himself, has extended the boundaries of this genre. He tastefully entwines elements of popular, classical and klezmer music into his explosive compositions, thus arriving at his own characteristic sound.