It’s not your dream 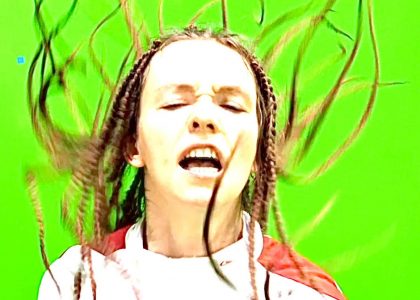 This performance emerged in self-isolation while experimenting with movement, sound looping station and textual contents that vary between rap, flow of free associations, vocal interjections and political slogans.

By proposing unexpected interpretations of the rebel figure, it generates and shares the positive and creative energy that lies in the dynamics of opposition and resistance. From the perspective of a ritual, the performer is looking for a state where her rebellious demonesses or goddesses are acting against the social organization in place, the normality, and the ritual itself – against resignation or helplessness, empowering and uniting those who are participating.

Vilma Pitrinaitė studied choreography at CDC de Toulouse and Ex.e.r.ce, CCN de Montpellier as well as theatre directing in the School of National Theatre of Strasbourg, collaborated as a dancer and actress with companies such as: La Zampa, cie Autremina, cie François Verret, Vincent Thomasset, Karim Bel Kacem, Karine Ponties/cie Dame de Pic, cie Diphtong/ Hubert Colas, Philippe Grandrieux, Cie Mossoux-Bonté. Her first piece was staged in festivals JT14, Théâtre de la Cité Internationale, Paris and Premières, Strasbourg. Second one, a solo “Miss Lithuania” was presented in Aerowaves Spring Forward, nominated as the best act of the season in Confluences, Paris, toured in Europe and USA. Vilma also created group pieces for two of the most important dance companies in Lithuania: Dance Theatre Aura and Šeiko Dance Theater. Recently she presented “Somaholidays”, which won the “Fortunos” award and was nominated for the highest Lithuanian Golden Cross Award. Performance “MATCH”, a duet with Emilie Gastineau (USA), premiered in “Brussels dance!” festival and “MATCH 2”, together with Sabina Scarlat, have been postponed and will premiere in the festival TB2 in Brigittines, Brussels, in 2021. It was already invited to Edinburgh Fringe festival, Italy and Poland.