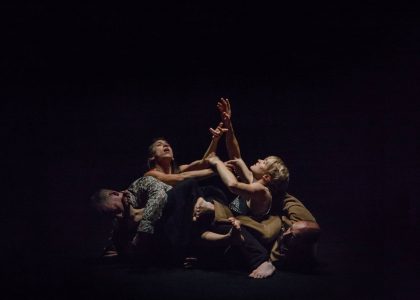 What if theatre, this space for creating fiction, was only waiting for the arrival of a spectator to swallow up and shape him/her as it pleases? What if this “black box” could take on a bodily form and life, show free will and desire? What stories would it then tell?

Starting from this simple yet unlikely scenario, Florencia Demestri and Samuel Lefeuvre have created their second co-written piece, situated between dance and theatre: a plunge into the abyss of a burrow, where it is more a question of visions/sensations than narration. A poem of sinuous paths seeking to distort our perception of bodies, space and time.

Florencia Demestri has lived in Brussels since 2003 and has worked with a number of contemporary dance companies: ”Les Ballets C de la B” (Lisi Estaras),”Charleroi Danses” (Michelle Anne De Mey), ”Enclave Dance Company” (Roberto Olivan),” Finger Six collective”, David Zambrano and, recently, the Groupe ”ENTORSE”. She also works on her own projects: in 2007, ”The Last Days Project” with Claudio Stellato, in 2010, ”Do you love me” with Pier Giorgio Milano, and in 2012, her own solo ”Olga” and the event-performance with Samuel Lefeuvre.

Samuel Lefeuvre was born in Vire, France, in 1981. After studying dance in Caen and at the CNDC in Angers, Samuel moved to Brussels where he danced with the Compagnie Michèle Anne De Mey, then for the”Les Ballets C de la B”. (Wolf by Alain Platel and La Mancha, Patchagonia and Primero/Erscht by Lisi Estaras). It was during the creation of Wolf that he first met Franck Chartier and Gabriela Carrizo who invited him to join the ”Peeping Tom” collective for Le Salon and Le Sous-Sol. Since 2007 he has collaborated with the musician Raphaëlle Latini, with whom he founded the groupe ”ENTORSE”. While working with the group he also collaborates regularly with the theatre director Julie Bérès, creates his own pieces (the solo monoLOG, the Bootstrap II evening – renamed the event – at the Théâtre de la Balsamine in Brussels, in collaboration with Florencia Demestri) and teaches and leads choreographic workshops (notably at La Raffinerie/Brussels and at Deltebre Dança/SP).