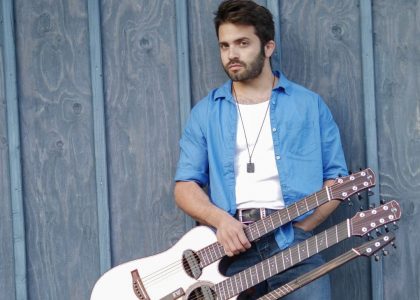 The only person in the world who can play two, three or even five guitars all at the same time! The skills of phenomenal guitarist Luca Stricagnoli leave professionals confounded and make his fans go wild. He captivates audiences both for his exceptional technique and his Italian temperament: each movement, word, note and smile become an unforgettable part of his shows.

Music of various genres can be performed on Stricagnoli’s constructed instrument (designed by Davide Serracini) – from pop to rock, from film soundtracks to original compositions.

So, it’s not just a unique performer that awaits on the stage this evening, but also a guitar whose appearance has caught the attention of over 40 million internet fans as well as music industry releases such as NME, Spiegel and La Repubblica.

Program features original compositions and works from the repertoire of U2, Red Hot Chilli Peppers, AC/DC and more