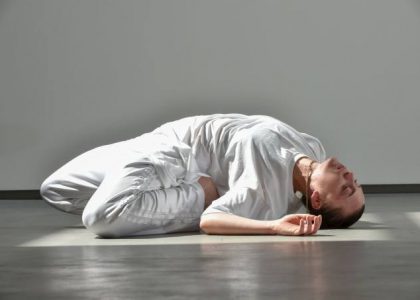 Created in 2012, this solo titled ”monoLOG” presents the performer as a medium between the audience and the dark manifestations phenomena that the latter cannot perceive alone. Inspired by the Log Lady character in David Lynch’s TV series Twin Peaks, Samuel Lefeuvre poses as a modern-day oracle, battling with his own obsessions and the expectations of the audience that eventually leads him into a trance during which the surrounding forces seem to twist his body to a breaking point.

Samuel Lefeuvre was born in Vire, France, in 1981. After studying dance in Caen and at the CNDC in Angers, Samuel moved to Brussels where he danced with the Compagnie Michèle Anne De Mey, then for the Ballets C. de la B. (Wolf by Alain Platel and La Mancha, Patchagonia and Primero/Erscht by Lisi Estaras). It was during the creation of Wolf that he first met Franck Chartier and Gabriela Carrizo who invited him to join the Peeping Tom collective for Le Salon and Le Sous-Sol. Since 2007 he has collaborated with the musician Raphaëlle Latini, with whom he founded the groupe ENTORSE. While working with the group he also collaborates regularly with the theatre director Julie Bérès, creates his own pieces (the solo monoLOG, the Bootstrap II evening – renamed the event – at the Théâtre de la Balsamine in Brussels, in collaboration with Florencia Demestri) and teaches and leads choreographic workshops (notably at La Raffinerie/ Brussels and at Deltebre Dança/ SP).

”Hope Hunt” lies between the lines of physical theatre, social proclamation and dance. A thumping black Golf, headlights on, sits in waiting. Music thumping from its metal shield. A man who is many men leeks in out of the metal beat, his story, a hunt for hope. Through speech, movement, and sound we are twisted and contorted through ideas of masculinity, morality and nostalgia. Through wet forgotten roads of memory; the hunter takes the audience with him.

He hits and swerves at extreme stereotypes of cultural and social class. Teetering on the fine lines between comedy and tragedy. To find the importance of self-belief. No matter where you are from, what class you are placed. There are essential needs of love ingrained in all of us. Removing the masks of ego and cultural affectations we find a common ground of truth and hope.

Oona Doherty is an Irish choreographer based in Belfast. She studied at ”London School of Contemporary Dance”, ”University of Ulster” and ”LABAN” London (BA Honours and Post Graduate in Contemporary Dance Studies). Since 2010 she has created and toured internationally dance and theatre works with Companies such as ”TRASH” (NL), ”Abbattoir Ferme” (BE), Veronika Riz (IT), Emma Martin /United Fall (IE).