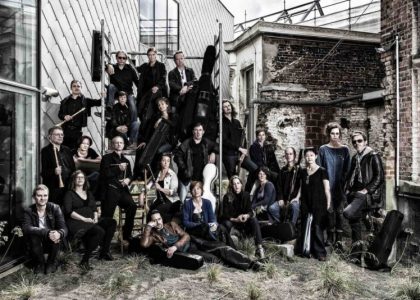 Set up in 2005, the Belgian Baroque Orchestra B’Rock is one of the world’s leading collectives specialising in historically well-founded performance practices. It involves over twenty international musicians. The Orchestra gives about 45 concerts every season, both in Belgium and abroad. Its appearances are always theatrical, exciting and often stunning. For its concert programmes, B’Rock combines established works of baroque composition with the lesser-known repertoire of the 17th and 18th centuries as well as contemporary music.

Tonight’s soloist Russian pianist Alexander Melnikov discovered a career-long interest in historically informed performance practice at an early age. His major influences in this field include Andreas Staier and Alexei Lubimov. Melnikov performs regularly with such distinguished period ensembles as the Concerto Köln and Akademie für Alte Musik Berlin. The pianist has earned numerous awards for his recordings of Beethoven, Shostakovich and Weber’s music. As a soloist, Melnikov has performed with orchestras including the Royal Concertgebouw Orchestra, Gewandhausorchester Leipzig, Philadelphia Orchestra, NDR Sinfonieorchester, Russian National Orchestra, Munich Philharmonic and Rotterdam Philharmonic among other orchestras.