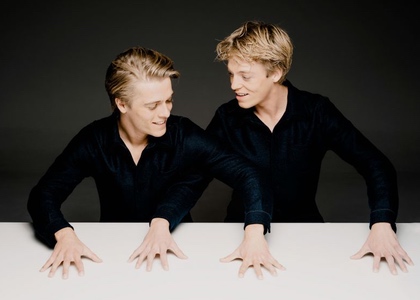 The Lithuanian Chamber Orchestra presents Dutch pianists Lucas and Arthur Jussen, known both as soloists and piano duo. Coming from a musical family, the ten-year-old Lucas and thirteen-year-old Arthur appeared with the Netherlands Radio Chamber Philharmonic under Jaap van Zweden. The brothers studied with Jan Wijn, Maria João Pires and Ton Hartsuiker. Today, at the age 25 and 21 they have performed with all Dutch orchestras, London Chamber Orchestra and Hong Kong Philharmonic Orchestra as well as Dallas, Dusseldorf and Shanghai symphony orchestras; have toured in Europe, Japan, China, South Korea and Mexico. The brothers have an exclusive contract with the Deutsche Grammophon Gesellschaft. For Vilnius Festival audience the pianists present Mozart’s Concerto for two pianos and orchestra No 10 in E flat major, which he wrote to play together with his sister Nannerl.

Tonight, the podium will be graced by Modestas Pitrėnas, a recipient of the Lithuanian National and Baltic Assembly prizes, the artistic director of the Lithuanian National Symphony Orchestra. Maestro has led various orchestras in many European countries, the USA and China. Recently, he has been conducting in Lithuanian and Latvian theatres, the Grand Theatre-National Opera in Warsaw, Deutsche Oper am Rhein in Dusseldorf, national opera theatres in Cologne and Helsinki, and Bolshoi Theatre in Moscow. He has led more than 30 different opera productions in Theater St. Gallen in Switzerland, where he will take a position of the principal conductor in August 2018.