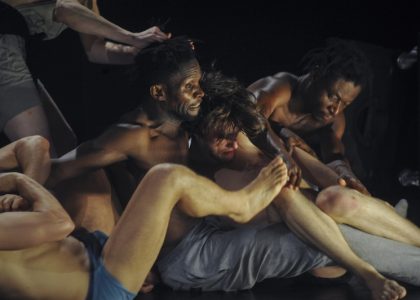 The new production of director Alain Platel uses the work of the Austrian composer Gustav Mahler as its starting point, as proposed by Gerard Mortier. It wasn’t love at first sight for Platel. Initially, he did feel particular affinity with the era Mahler expresses in his work: an age of great acceleration and disruption leading up to World War I. But then, in the nervousness and aggressiveness, the passion and yearning for a lost harmony that’s expressed by Mahler’s music, Platel discovered a match for the images he’s looking for in his work.

The musical direction is in the hands of composer Steven Prengels. In the soundscapes, he puts the Mahler in contrast with African polyphonic chants and herds in sounds of cowbells or sleeping animals. In terms of stage-setting, this is the first collaboration between Alain Platel and visual artist Berlinde De Bruyckere. What these two have in common is a love for the big themes of suffering and death. Together with a group of nine dancers, they started the search for the potential of transformation, holding on to the shaky hope that things will not end in large-scale destruction. That potential, that possibility is what this group of dancers are after in every performance. No safety net. It’s a dance of life and death.

”Les ballets C de la B” was founded by Alain Platel in 1984. Since then it has become a company that enjoys great success at home and abroad. Over the years it has developed into an artistic platform for a variety of choreographers and dancers. The company still keeps to its principle of enabling artists from various disciplines and backgrounds to take part in this dynamic creative process. As a result of its “unique mixture of artistic visions”, ”Les ballets C de la B” is certainly not easy to classify. It’s nevertheless possible to discern something like a house style (popular, anarchic, eclectic, committed), and the company’s motto is “this dance is for the world and the world is for everyone”.

After ”Allemaal Indiaan” he announced that he was stopping making productions. But shortly afterwards Gerard Mortier persuaded him to do ”Wolf” based on Mozart for the Ruhrtriennale. ”Vsprs” proved to be a turning point in his career. Platel consistently continues to search this language of movement for incarnations of feelings that are just too vast. The yearning for something transcending the individual is becoming more and more palpable. He also almost surreptitiously entered the arena of the dance cinematography together with the British director Sophie Fiennes – ”Because I Sing” (2001), ”Ramallah! Ramallah! Ramallah!” (2005), ”Vsprs Show and Tell” (2007), and solo with de balletten en ci en là (2006), an impressive view of what goes on in a twenty-year-old dance company, taking us all the way to Vietnam and Burkina Faso, but also and mainly being an ode to his hometown Ghent.