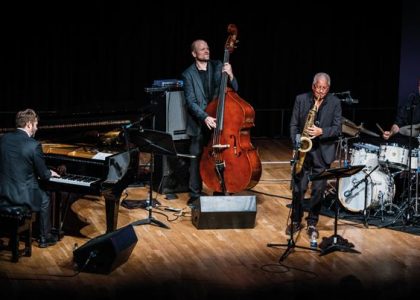 “I heard Coltrane and I thought ‘Yeah, that’s it, that’s what I want to do’, so I sold everything I owned, bought a saxophone, and did nothing else but play for two years.”

Andy Sheppard is one of Europe’s leading saxophonists, a rare British musician who has had a profound impact on the international jazz scene. Sheppard, who was born in Wiltshire in 1957, took up the sax at the age of 19 and was playing in public within three weeks. After a period in Paris where he played in bars seven nights a week and worked with groups including performance art band Urban Sax, he returned to the UK in the mid-1980s and began his recording career.

With a career spanning over four decades Andy Sheppard is truly one of Europe’s leading saxophonists. He is currently an ECM recording artist with his own quartet.

Espen Eriksen Trio was formed in 2007 and released their first album in 2010. Since then they have released two more records on Rune Grammofon, and toured in 16 countries across four continents. The music relies on highly melodic tunes and a “less is more” approach often credited for its unique voice within today’s jazz scene by the international press. To quote BBC in their review of the trio’s second album; “A wonderfully plaintive jazz record, abandoned to the lost art of melodic minimalism, stripped back and beautifully near bare. No smoke and mirrors, just the graceful chemistry of superb musicians at the top of their game”.

In 2017 trombonist, composer and arranger Jievaras Jasinskis together with 16 professional jazz musicians created a new Big Band called “Lithuanian JJazz Ensemble”. The orchestra’s debut performance took place in “Broma Jazz Festival” in 2017. The Big Band performed compositions and songs by Jievaras Jasinskis, Liutauras Janušaitis and Dorotėja Būdaitė. The orchestra has already collaborated with such performers as the vocal ensemble “The Backs” and a singer-songwriter Vytautė Pupšytė.
„Lithuanian JJazz Ensemble“ is looking forward to performing in “Vilnius Mama Jazz Festival” as well as to the release of their already recorded debut album in 2019.