Opening of the New Baltic Dance ’18: “Our Home” 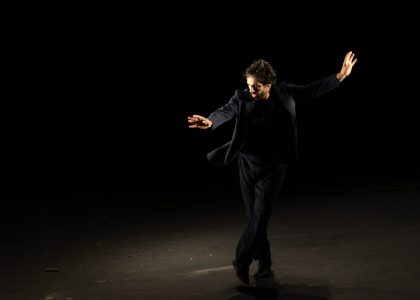 Four choreographers and four musicians – with different artistic experiences and ideas, coming from different continents, cultures and countries – are meeting on stage over a banquet of food. They talk, drink, laugh, dance and prepare food together. A simple meeting that becomes a starting point to a more complex choreographic and conceptual performance structure. Beytna is an invitation to the home of the other, to the artist’s profession and choreographic construction. It’s an invitation that guarantees diversity, touches on forms and situations of the past, searches for a new rhythm, pattern, logic.

Since 2002, the company has been touring locally and internationally. It has also supported, produced and presented works for local emerging artists. In addition to the creative work, Maqamat, together with a network of international and regional partners, focuses on building an infrastructure for contemporary dance in Beirut. One of the most important achievements of the company was the creation of BIPOD-Beirut International Platform of Dance. Bipod celebrates its 10th anniversary in April 2014.

Omar Rajeh, choreographer, dancer and artistic director of Maqamat Dance Theatre is considered to be the architect of the contemporary dance scene in Lebanon. After his Theatre Arts studies at the Lebanese University and dance studies at the University of Surrey, England, he founded his dance company Maqamat Dance Theatre in 2002. Since then, the company has created more than 15 performances and has worked in co-production with internationally renowned venues and festivals around the world.

His choreographies deal with everyday questions, concerns and perceptions in a fascinating and captivating way. Omar’s work, intense and powerful, is continuously questioning the individual human experience and seeking an extraordinary physical presence.