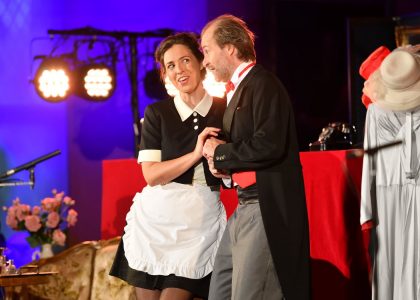 Georg Philipp Telemann was one of the most influential and skilled composers of his time, a driving force behind the development of the Late Baroque and Early Classicism. He is the creator of the “mixed German style”: a blend of German, French, Italian and Polish styles. He was a man of the world, being blessed with independent financial means, a vast general knowledge, and a sharp mind. His artistic creativity left us numerous musical opuses in all musical genres, and it is a valuable document of historic heritage.

“Pimpinone” or “The unequal marriage” was premiered in 1725 in Hamburg with a fulminant success. The plot is the game of flirt and war, ingeniously lead in German and Italian, between the master Pimpinone and the servant-maid Vespetta (“little wasp”). This female character is a combination of popular sexist clichées on that time: the arriviste woman, the shrewd woman, the manipulating woman, the woman who will play the game only as long as it serves her. “Pimpinone” served as an inspiration for numerous later works, like “La Serva Padrona” by G.B. Pergolesi.

Project is sponsored by Goethe-Institut in Lithuania