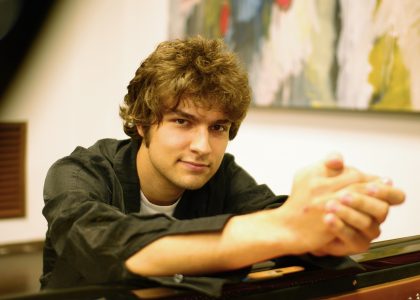 This year the position of the recital of the Vilnius Festival is entrusted to charismatic pianist Lukas Geniušas. A member of famous dynasty of musicians, Lukas often jokes, that he wasn’t given a chance to pick out the profession: since he was a child he has been surrounded by musicians who never let him free… “Now I can’t imagine a different life. At the age five I was put on the pianist’s path and now am grateful to all those who did it.” The 23-year-old musician is a winner of ten international piano competitions including Gina Bachauer in Salt Lake City (first prize and golden medal, 2010) and Fryderyk Chopin in Warsaw (second prize and silver medal, 2010). In 2012, he was awarded Deutscher Pianistenpreis in Frankfurt am Main. L. Geniušas has appeared with diverse orchestras (Hamburg, Duisburg, Scottish BBC, Kremerata Baltica, Warsaw Philharmonics, Lithuanian State Symphony Orchestra) and given recitals in Russia, Lithuania, Poland, Sweden, Germany, Spain, Switzerland, France, Austria, Japan, South Korea and the USA. This year in addition to other concert appearances the pianist will make his debut in Zurich’s Tonhalle and Paris’ Salle Gaveau.