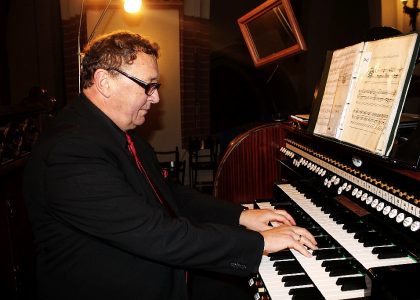 We would be hard-pressed to find an organ that hasn’t been played by the Polish virtuoso Andrzej Chorosiński, from the Notre-Dame Cathedral in Paris, the Adelaide Town Hall, the Aula Paolo in the Vatican to Saint Patrick’s Cathedral in New York, the Tchaikovsky Concert Hall in Moscow and King’s College Chapel in London. These a but a few of the stops along the way on the impressive concert map of this performer.

Chorosiński’s discography, featuring masterful improvisations, consists of over 20 recordings, while his active cultural activities testify of an enviable collection of awards and medals. The professor of the Warsaw Chopin and Wroclaw Lipinski music academies is convinced that the organ must be a magical instrument, capable of transporting us just that little bit further than is otherwise written in the sheet music. We have no doubt that you’ll be assured of this at the concert of this masterful organist.

Program: G. F. Haendel, A. Guilmant, M. Sawa and others