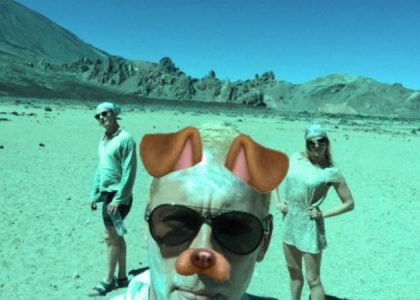 On an assembly line on 120 beats per minute, three dancers from different generations examine the theme of escapism. The home-made movies from touristic trips are mixed with dance club rituals in search for means to enter a state of ”somaholidays” as described in the dystopian novel ”Brave New World” by Aldous Huxley – an artificially induced catharsis, a threshold to more real reality without guilt, shame or civic accountability.

Vilma Pitrinaitė (LT/BE) is a Brussels-based dancer, performer and choreographer, a co-founder and art director of independent dance and theatre company ”We cie”. She has started her dancing career in Kaunas dance theatre ”Aura”, and has studied choreography at CDC Toulouse and ”Ex.e.r.ce” at CCN Montpellier, also theatre directing at École de Théâtre National de Strasbourg.

The first project by ”We cie” is staged at festival JT14, Théâtre de la Cité Internationale, Paris and festival Premières, Maillon, Strasbourg. Her solo ”Miss Lithuania” premiered in ”New Baltic Dance Festival” 2014, and was presented in ”Aerowaves” Spring Forward festival among others, nominated as the best act of the season in ”Confluences” theatre, Paris. In 2016 she returned to Aura as a choreographer of the dance piece ”Pandora”. Recently, she has been working on a duo performance ”Match” together with American choreographer Emily Gastineau (part of Fillimit and Atlas/Impulstanz young choreographers’ networks). Vilma is now mostly interested in the topics of identity, anxiety, Internet as folk art and the meme culture.

Mantas Stabačinskas (LT) is an award-winning dancer and choreographer who has been nominated for the Lithuanian National Prize for Culture and Arts in 2017. Former long-time member of Kaunas dance theatre ”Aura”, an alumni of the Lithuanian Academy of Music and Theatre, Mantas has been working with many famous choreographers and theatre directors from Lithuania and abroad, such as Birutė Banevičiūtė, Lora Juodkaitė, Birutė Letukaitė, Aira Naginevičiūtė, Johannes Wieland, Annie Vignier and Franckas Apartet, Artūras Areima, Jonas Vaitkus among others.

He has collaborated with choreographers from the US, Germany, England, Israel, Canada, Finland and Austria. As a visiting lecturer, he has been teaching at Middlesex University, London. M. Stabačinskas was awarded the most prestigious Lithuanian Theatre award – the ”Golden Sctage Cross” – as the best dancer in 2013, whilst the dance piece ”Contemporary?”, created by him together with a collective ”Stage Strangers” has won in the category of a ”Phenomenon of a Year” in 2014. His contemporary dance duo with Marius Pinigis – ID: D&G – has been awarded the Kaunas city theatre prize in 2016.

Darius Algis Stankevičius is a London-based dancer and choreographer. He performed within the ”Aura” dance company from 1991 to 2004, representing Lithuania’s contemporary dance in 27 foreign countries (Austria, UK, Greece, Canada, France, Russia, Finland, Sweden, Germany and so forth), during more than 162 festivals. In 2000 and 2001, he worked for international projects ”Rose ist eine Rose” and ”Soung”, ”Tanz Braunschweig” and ”Une Reine”, ”Reste Une Reine”, ”Mafada”, Zurich. In 2004, he created the piece ”Thief ‘s Journal” for ”Aura” and retired from his dancing career. He returned only recently, with a solo ”He Lived Next Door” made for him by Ieva Kuniskis in London.