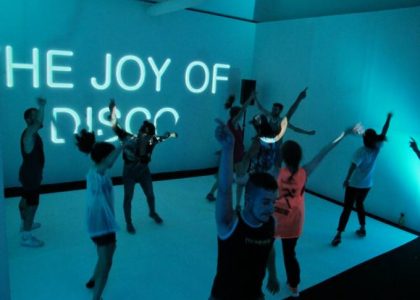 ”Sweet Fever” is the execution of a single dance phrase on a constant loop, the iconic choreography from Fever Night, the collective line-dance of Saturday Night Fever. Performed by a large group of volunteers, its long repetition for almost an hour navigates between faithful execution, modification, deformation and version, and at the same time enters into dialogue with the other theatrical elements, such as video, music and lights that re-signify this iconic chorographical representation of the party and disco worlds.

It’s a ritualistic and ecstasy-like trip that proposes a physical and reflective experience around the party world and the constant search for abandon and immediate happiness in our current society. A political, funny and sweaty analogy presenting the ”Macarena” of the 1970s on current techno music in order to reflect the party world and the idea of going out dancing as a new social and political space, a space between disco and theatre, between physical pleasure and intellectual discourse, between the happiness of Hollywood and the euphoria of techno, between the representation of happiness in the big screen and the contemplation of the euphoric body, dancing happily and exhausted at the same time.

Pere Faura graduated from the School for New Dance Development in Amsterdam in 2006, with a piece that won the ITS Festival Award, and was selected for the ”DansClick” tour in different cities in the Netherlands. That same year he entered as a resident choreographer at the Frascati Theater in Amsterdam and in 2009 he received the prestigious Charlotte Kohler Price. In 2011 he graduated from the Amsterdam Master of Choreography and returns to Barcelona where he continues to produce new shows with the collaboration of several creative centres in the city.

His work is characterised by the appropriation of elements of pop culture, in a multidisciplinary choreography among all the elements that make up the theatrical gear. In addition to his work as a creator, since his return to Barcelona, he has also participated in programming and design of artistic exhibition contexts through the platform CRIM (Creators Independent in Movement), within the collective ARTAS (ARTistas ASociados a La Poderosa) and as a founding member of G.R.U.A. (Grup de Recerca d’Universos Artístics / Research Group of Artistic Universes) where he still develops projects like Caravan of Trailers in collaboration with Claudia Solwat and Anna Rubriola.