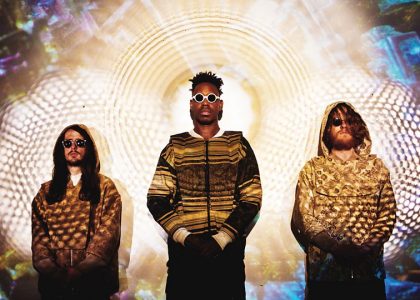 THE COMET IS COMING (United Kingdom)

A really fascinating music comet will appear at the Vilnius Mama Jazz festival as it is “coded” in the group’s name.

The Comet Is Coming, one of the most remarkable British jazz discoveries of the decade – although you can’t call the music they play simply jazz – will perform in Lithuania for the first time.

Members of the trio use pseudonyms “King Shabaka”, “Danalogue the Conqueror” and “Betamax Killer” for their real names and their music is called a soundtrack to an imagined apocalypse. It is a telling description of their creative work.

The group incorporates elements of jazz, rock, psychedelic funk and electronic sounds to produce something completely unique, eccentric and stunning. Who will lead the survivors to the new sonic world after the demise of all we hear and know? Perhaps the Comet Is Coming has an answer to this.

In 2013, three talented musicians met in London. It is said they have created not only music, but built a powerful vessel enough to transport any party into outer space.

Sci-fi and space are the running themes in the work of the trio. Because of this (but not only), the Comet Is Coming is sometimes called the true heirs of the legendary jazz eccentric Sun Ra. Other sources of their inspiration include rock thinkers Jimi Hendrix and Frank Zappa (perhaps the musicians will seize the opportunity to visit a monument to Zappa while in Vilnius).

Don’t be mistaken, however, the music of the Comet Is Coming is original, utterly fresh and superb. The combination of exuberance and mystery has already been captured in recordings of the band which have been well received by the critics and fans alike.

The debut album Channel the Spirits (2016) was shortlisted for the Mercury Prize Album of the Year awarded for the best album released in the UK.

The second album of the group, Trust in the Lifeforce of the Deep Mystery, which appeared in spring this year, is as impressive as the Comet Is Coming’s debut. The album features a track with one of the most original British poets, rapper Kate Tempest.

“If Sun Ra had relocated to Cologne in 1971, he may well have made an album like this,” MOJO, the world’s largest UK music magazine, wrote about the Comet Is Coming. But let’s leave all those opinions aside and experience the music first hand.

The saxophonist of the Comet Is Coming, Shabaka Hutchings, is already familiar to the Vilnius Mama Jazz audience. Four years ago, one of the British jazz music’s top performers played on the festival scene with another amazing group Sons Of Kemet.

There is no doubt that the appearance of the Comet Is Coming will be equally impressive and we are delighted that the tide of the newly confident British jazz is not stemming. Inspired by cosmic thoughts and low-budget 1970s films, the musicians of the Comet Is Coming are bringing mountains of imagination to Vilnius, which, if you ask us, is the word which probably best describes jazz. Get ready to be surprised – the interstellar comets will no longer seem so far.

“One of the great musical thinkers of our time” – this is how music critics describe the leader of the quartet, saxophonist Oded Tzur. Sounds bold, but when you begin to delve into his work, such praise does not seem like an exaggeration.

The 35-year-old Tzur, who will share the Vilnius Mama Jazz scene with his band members, is a representative of the young generation of jazz musicians with impressive accolades that can be compared to those of much older musicians.

Oded Tzur Quartet is a New York based group. Tzur is originally from Tel Aviv in Israel where he started his career. Later the musician moved to study in the Netherlands and for the past eight years has been active on the New York jazz scene.

In Israel, Tzur’s protégé was the saxophone maestro Gersh Geller, but he is not the only musician who influenced Tzur in his formative years.

With an interest in the classical Indian music, Tzur embarked on the studies of this music and was the first saxophonist who was taught by the legendary Indian flutist Hariprasad Chaurasia.

“If a curtain were to be drawn in front of Oded, no one could tell which instrument was being played,” Hariprasad summed up the original sound played by his student.

“I didn’t even know it was possible,” the musician said. He succeeded in achieving his ambition. Today saxophonists from Australia to the United States learn his playing technique. He was also invited to lecture on the subject at a number of key institutions, such as Trinity College of Music in London, the Amsterdam Conservatoire or the Copenhagen Conservatoire.

Following his move to New York, Tzur quickly became part of the local music scene and in 2015 released his debut album Like A Great River. The album earned extraordinary critical acclaim.

Critics noted Tzur’s great musical storytelling and kinship with poetry. “This musician is like a volcano on the ocean floor,” Downbeat Magazine described Tzur’s unique language probably referring to the characteristic contrasts where quiet passages suddenly erupt into fiery improvisations.

In 2017, his second album Translator’s Note strengthened his reputation as a musician. All About Jazz called it one of the best albums of the year.

Some say that Oded Tzur masterfully combines the two musical traditions – Indian music and jazz, others maintain that he has invented a new type of swing, yet others say that his language of improvised music is unique. We tend to agree with all these opinions and are sure that these guests from New York will offer some of the most impressive moments at this year’s Vilnius Mama Jazz.