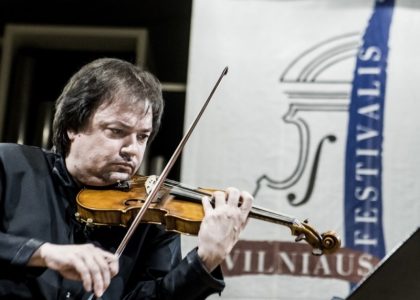 This concert is dedicated to the 100th birth anniversary of Lord Yehudi Menuhin (1916–1999), the great humanist, legendary violinist and conductor, and close ally of Lithuanian musicians. The recipient of the Order of the Lithuanian Grand Duke Gediminas as well as the Lithuanian Academy of Music and Theatre Honorary Doctorate, Menuhin collaborated with many a Lithuanian musician and collective. Only just with the Lithuanian Chamber Orchestra and Kaunas State Choir he gave 59 concerts, recorded two oratorios: Handel’s Messiah and Haydn’s The Creation. Standing ovations filled concert halls in Germany, Spain, Italy, France, Norway, Finland, Switzerland, Croatia, Slovenia and Egypt. Menuhin affectionately called the members of the Lithuanian Chamber Orchestra and Kaunas State Choir “my Lithuanians”; while in his memoirs Unterwegs he described the LCO as magnificent.

Concert programme features Vivaldi’s Le quattro stagioni (The Four Seasons) with the LCO’s artistic director Sergej Krylov, always brimming with unique ideas, as a soloist; Dvořák’s Serenade for strings in E major, Op. 22; and premiere of the Festival – Loreta Narvilaitė’s Į krantą jūra krenta (The Sea Breaks on the Shore) for string orchestra. “I named the opus after a poem by Antanas A. Jonynas. The sea is the movement and energy, the shore – the stasis. The sea is a mighty power; it alters the shore, washes away dunes. When working on the composition, I saw an image of the Dutchman’s Cap hill being continuously destroyed by the braking waves. There is no other slope on Lithuanian seashore as steep as this one. It was a place for putting warning signs for ships. Their signals can be heard in the composition, as can the screams of seagulls floating high above. Brief waving lines are reminiscent of sutartinės,” says the composer.