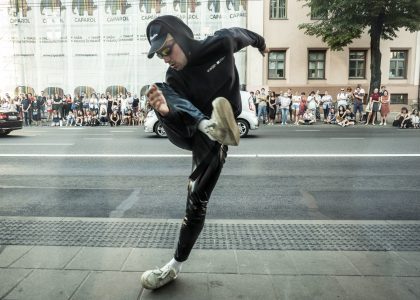 Theo’ is a vignette within the story of an introvert who, over time, observes himself slipping further into his addictions, into people, into attention; and here we find a paradox. The more tightly he is bound to these dependencies, the more free he becomes. The question is thus whether this freedom of expression is genuine, or whether it is derived from the need to be increasingly more attached to one’s surroundings to feel safe. While the themes within the piece already give much to consider, its success lies in the quality of movement, and the temporality of the location in which it takes place. Staged to be performed in public, at a bus stop, even the simple act of viewing ‘Theo’ feels performative. The audience watches it from one of the two locations; from the bus stop where the performance takes place, and which quickly becomes a crowded and intimate place, or gathered on the opposite side of the street which feels detached and somehow voyeuristic. In each case, the staging draws the spectator into the performance, while the bus stop remains in service throughout its duration, adding the layers of movement as the buses passing temporarily block the scene from the view, introducing or removing the clueless passenger into or out of the scene.

Lukas Karvelis is a Lithuanian artist of the younger generation who has already received a lot of attention for his sensitive, vulnerable, daring performances and charismatic personality. His dance is a unique and highly peculiar phenomenon infused by his individual style. In 2019, Karvelis graduated from the Codarts University for the Arts. Taking into account his strong academic background, Karvelis also explores urban dances and the ballroom (vogueing) scene. All these styles come together in his artistic research. As a dancer, he worked in Kammerspiele theatre in Munich, Korzo theatre and Dansateliers in Holland. His solo Blank Spots travelled over numerous cities around Europe, Brazil, Turkey and Israel. Lukas Karvelis takes great interest in various forms and experiments, benefiting from all of the advantages of interdisciplinary arts; therefore, he has already collaborated with film directors, musicians and performing artists.