Vespers for St. Hyacinth. Closing concert of the singing masterclass 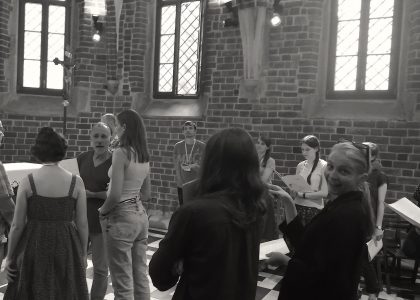 Jean-Étienne Langianni (France) together with participants of the singing masterclass

Closing concert showcasing the fruits of the workshops in the fauxbourdon technique for the melodies of Gregorian chant, improvisation and Corsican singing led by composer Jean-Étienne Langianni (France). The Vespers for St. Hyacinth, including hymns to the saint, antiphons and psalms will be developed during the course of these workshops. The venue for the closing concert of the workshops was chosen in honour of St. Hyacinth, 13th-centiry apostle and missionary, one of the patron saints of Lithuania, and a monk of the Dominican Order, The Dominican Church of the Holy Spirit in Vilnius and nearby buildings mark the first establishment of the Dominican Order in Vilnius.
Many stories surround St. Hyacinth, and various sacred practices of the Lithuanian and Polish peoples relate to the saint. Indeed, all of the works of the Dominicans operating at the time in Prussia and other countries of the Baltic Sea region are attributed to St. Hyacinth. According to legend, St. Hyacinth crossed half the globe and worked many miracles. Most of these occurred before he was canonised by Pope Clement VIII in 1594. A list of St. Hyacinth‘s miracles created between 1521 and1523 includes the following: 101 people were cured by intercession of the saint; 36 recovered from agony; 69 were relieved of pains in the arm or leg; 40 were cured of blindness. In addition, the St. Hyacinth helped 32 women in childbirth; healed 29 syphilitics, cured 22 of long-lasting fever. The saint also helped 21 persons with oedema and 14 with epilepsy.