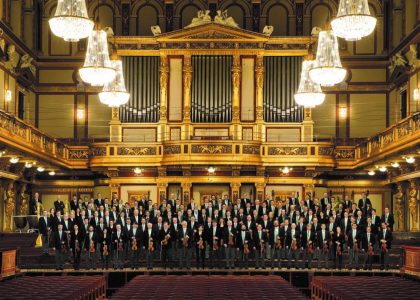 Opera megastar and one of Europe’s most enchanting mezzo-sopranos Elīna Garanča and Vienna Philharmonic Orchestra, one of five world’s best orchestras, under the baton of Rafael Payare, a conductor of younger generation, present Vilnius with a sophisticated 19th and 20th century music programme.

Latvian mezzo-soprano Elīna Garanča has conquered major theatre stageswith her special voice and extraordinary intelligence. Last summer at the Vilnius Festival she has made an unforgettable impression on Lithuanian audience. This time, Elīna Garančaand Vienna Philharmonic Orchestra will open the musical heart of the Vienna’s fin de siècle with Mahler’s vocal cycle Rückert-Lieder (1901–1904) and an exquisite song Urlicht (Primal Light, 1893), which Mahler employed as the penultimate movement of the Symphony No 2.

The Vienna Philharmonic Orchestra (Wiener Philharmoniker) will make its first appearance in Lithuania. It is one of the oldest and most widely known symphony orchestras in the world. Established in 1842, the Vienna Philharmonic Orchestra is considered to be an inseparable part of European classical music tradition. Its annals list names of the most celebrated conductors and premieres that today are the fixtures in the golden treasury of classical repertoire. Thanks to modern technologies, millions of TV viewers and Radio listeners got acquainted with the name and unique sound (so called “Wiener Klangstil”) of the Orchestra. Vienna’s Musikverein, the home base of the Orchestra, holds annual New Year concert, which is broadcast to more than 70 countries.

The Vienna Philharmonic Orchestra had enjoyed accolades from the music geniuses of the past. The whimsical Wagner saw it as “the most illustrious in the world”, Brahms admitted to be an “admirer” of the Orchestra and was happy to have entrusted it with the premieres of his symphonies, while Richard Strauss said it bluntly: “No commendation can do justice to Vienna Philharmonic Orchestra”.

Moreover, the Orchestra’s uniqueness extends to the fact that, officially being a part of the Vienna State Opera, it never had an artistic director. The Orchestra is responsible for selection, invitations and engagements of the conductors. The Vienna Philharmonic Orchestra has collaborated with such legendary conductors as Hans Richter and Felix Weingartner (19th c.) and Gustav Mahler, the 20th-century luminaries Wilhelm Furtwängler, Herbert von Karajan, Leonard Bernstein, Georg Solti, Bernard Haitink, Pierre Boulez and many other celebrated masters of the baton.