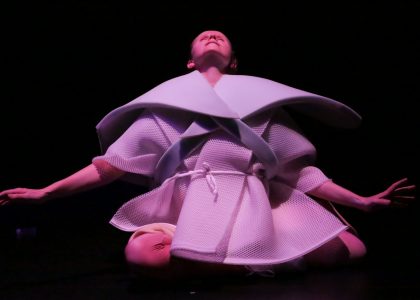 Presented with Aerowaves
Duration: 2 hours (audience is free to move around, leave the room and return)

Seduced by the belief that a fierce strongman, is all we need to get things done and save the world, choreographer Anne-Mareike Hess, takes us in her solo on a journey of becoming a warrior. Within a distorted and at the same time soft soundscape emerges a profoundly poetic image of human fragility and inner disruption. A dancing body caught in a perpetual fight with its emotions.

“Warrior – durationally unplugged” is based on the 45 minute dance solo “Warrior” to be performed in a black box. This long durational adaption for the National Gallery of Art has been commissioned by the New Baltic Dance festival.

Anne-Mareike Hess works as a choreographer and dancer in the field of contemporary dance. She did her education at the Conservatory and at TROIS C-L in Luxembourg, at the HfMDK in Frankfurt/Main and at HZT Inter-University Center for Dance in Berlin (Master in Choreography).

Anne-Mareike dedicates herself to the body with a high analytical ability and great precision. Her interest lies in bodies on the edge, touching physical and psychological borders and searching for transformation.

Anne-Mareike’s own choreographies have been shown at different festivals in Europe and Canada. Her first evening-long solo “Warrior”, premiered in 2018, has been selected by Aerowaves Twenty20. Currently she is preparing a new solo entitled “Dreamer”, that will premiere at the end of 2021.

Since many years Anne-Mareike works in close collaboration with TROIS C-L in Luxembourg and Skogen in Gothenburg and Dock11 in Berlin. As a performer Anne-Mareike has been working a.o. with William Forsythe (Human Writes), Eeva Muilu, Rosalind Goldberg (“MIT” and “Jump with me”), Ingri Fiksdal (“cosmic body”) and Miriam Horwitz (“Nijinsky”). Furthermore, she is working as an artistic advisor, coach and mentor for several choreographers.

Feedback and reviews of the blackbox version:

“Warrior, the latest creation of choreographer Anne-Mareike Hess, is a phenomenal act of resistance she reveals through a metamorphosis of her body.” (Marie-Laure Rolland for La Glaneuse 10.12.2018)

“When the “fight” comes to an end it has created a noticeable intimacy between the dancer and the audience. The initially individual struggle became a common one.” (Christine Mandy for Journal 10.12.2018)