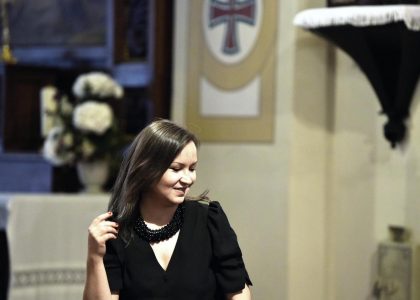 The first half of the 17th century was a time of cultural flourishing in the Polish–Lithuanian Commonwealth, whose music scene was active in terms of both performance and education. The University of Vilnius, established in 1579, had its own instruments and musical scores, as well as a vocal-instrumental chapel. Vibrant cultural exchange took place with neighbouring territories, and musicians arrived from even further afield to work on Polish and Lithuanian soil. Due to the efforts of the newly established Jesuit colleges, sacred music sounded within the walls of the Grand Duchy’s churches.
Over the past year, the work of harpsichordist Alina Rotaru has focused in particular on the study of three keyboard music sources preserved in Vilnius libraries: the Kražiai manuscript, the Sapieha Album, and the Braunsberg/Oliva organ tablature.
This programme aims to provide an insight into the broad musical universe surrounding the Jesuit Baroque, and to shed some light on a valuable but so far too-little-known repertoire.