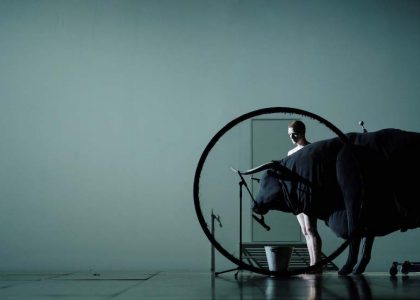 “What do you expect from a dance performance?  That it leaves traces in our bodies and our memories, that it delves into us without us realizing it, that it lets us see, experience, imagine, recompose.  May it make us cry too.  This is all that Dimitris Papaioannou offers to us with Transverse Orientation his latest creation, a pure masterpiece presented as a world premiere at the Biennale de la danse in Lyon.”

“Carried by eight magnificent performers, enveloped in the music of Vivaldi, Transverse Orientation is an abundance of images whose formidable aesthetics question the meaning of our lives or simply challenge our emotions, leaving us the choice to imagine and create our intimate shocks. It is all the strength of this work which, behind the apparent chaos, lets in the luminous bursts of a rebirth!”

Papaioannou’s 25 productions range from mass spectacles with thousands of performers, to intimate pieces, and have appeared in a wide variety of venues, from his famous underground squat theater in Athens, to the ancient theatre in Epidaurus, and from Olympic stadiums to Théâtre de la Ville – Paris, and Teatro Olimpico in Vicenza.

In 2018, Dimitris has become the first artist to create a new, full-length work for Tanztheater Wuppertal Pina Bausch. SINCE SHE premiered in May 2018 in Wuppertal (Germany) and was presented in Amsterdam, London, Athens, Paris, and Catanzaro.

Originally scheduled to premiere at Onassis Stegi in Athens, due to the pandemic TRANSVERSE ORIENTATION (2021) was first performed on 2 June 2021 at the Biennale de la Danse de Lyon in France, and will tour to more than 30 cities.