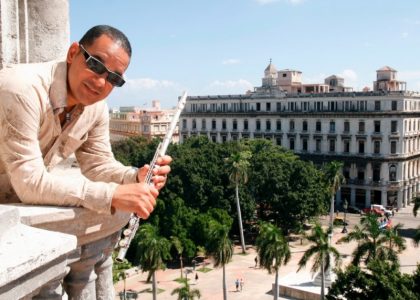 The Fleeting Night of Jazz

The fiery flutist Orlando Valle Maraca and his Latin Jazz All Stars Septet proceed with their European tour! After concerts in Mexico and the coveted Théâtre du Châtelet in Paris Maraca comes to Lithuania! In fact, with Otra Visión jazz group he has appeared in the Vilnius Festival in 2003. Orlando Valle Maraca is one of the leading flutists in Latin America, and also has outstanding reputation as a pianist, composer and arranger. He is the Grammy nominee and according to Island Beat (2000) plays the leading role in Cuban music evolution. He started his career in groups of Emiliano Salvador and Bobby Carcassès, was a member of and arranger for Chucho Valdés’ Irakere, the world’s best Latin jazz group at the time. Before long he got interested in music aspects that are vernacular to both American and Cuban music claiming that jazz and Cuban music share the African rhythmic and intonation patterns. “I learned the most when making music with others: their energy fascinated me – we share it when playing together,” says Maraca. “In Cuban music I find elements of three cultures – African, Spanish and French. This music originated from their combination. Today Cuban musicians are hardly interested in their roots, while for me getting back to it is very important.” This time the flute virtuoso and improviser Maraca invites to a musical journey together with his Latin Jazz All Stars Septet, which has given concerts around the globe. Inspired by the native music traditions as well as legacy of Cuban composers, their music presents an intriguing blend of jazz and Afro-Cuban style phenomenally enriched by the refreshing solos of Maraca’s Cuban flute. And all of this is heightened by the mastery of Maraca’s partners ranked among the most spellbinding jazzmen, Grammy winners and nominees, jazz innovators: American luminaries Steve Turre (trombone, Conch shells), Robby Ameen (percussion) and Tim Mayer (saxophone), promising Venezuelan percussionist Orlando Poleo, outstanding pianist Mario Canonge from Martinique and talented Cuban double bassist Felipe Cabrera. For the Vilnius Festival audience the musicians present a programme based on the repertoire of Maraca and his colleagues most famous DVD (Reencuentros, live at the Grand Theater of Havana), which was voted the best recording of the year. According to the world press, this music is a dream, history and assertion that our differences can be shared to conquer the prejudices. Wherever they perform, they make the borders disappear and music, smiles and creative freedom reign.