Missa Dominica in Albis. Mass setting for the second Sunday of Easter 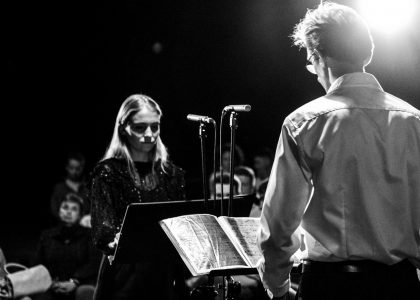 Missa Dominica in Albis (White Sunday ‘in white clothing’) is a cyclical vocal piece intended for singing at Holy Mass on the Second Sunday of Easter. The Second Sunday of Easter is associated with the wearing of white clothes due to a liturgical practice that existed in the early ages of Christianity, when those baptised during the Easter Vigil would wear white clothes for eight days afterwards. Thus, like newborns, they began a new life in the Christian community. Recently, the Second Sunday was given an additional name – Dominica Misericordiae (the ‘Sunday of Divine Mercy’). This new cult of Mercy not only complements the established Sunday liturgy of the white clothing, but also continues it as a living tradition.
Composer Jean-Étienne Langianni created the Mass Ordinary – the ordinary parts of the cycle (Kyrie, Sanctus and Agnus Dei) – based on Gregorian chant Mass for the Easter period – Lux et Origo (Light and Origin). The concert will also feature parts of the Proper of this Sunday Mass in Gregorian chant – introit Quasi modo (the introductory song ‘Like Newborns’), gradual Haec dies (the Psalm ‘On This Day’), and so on. The Mass will also include Lithuanian traditional chants of the Holy Mass.