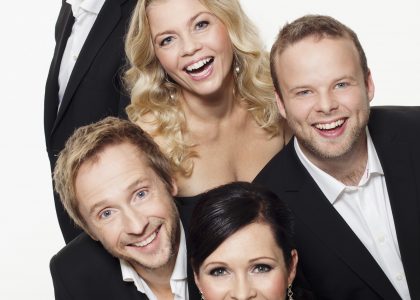 The Real Group has sung together since 1984. The members of the group met while studying at the Royal University College of Music in Stockholm and there formed a vocal group that would later become world famous. They have performed in a variety of different settings and have travelled all over the world. They have been voted the world’s best vocal group by global organization CASA (Contemporary A Cappella Society of America) and have, over the years, received many awards for their albums and solo performances, among them awards that have previously gone to groups such as Singers Unlimited, Manhattan Transfer and Take 6. The Real Group has worked with quite an array of global artists, for example Barbara Hendricks, Bobby Mc Ferrin, Van Morrison, Sir George Martin and Toots Thielemans. They have worked with such Swedish artists as Titiyo, Lisa Nilsson, ABBA’s Frida and Povel Ramel.