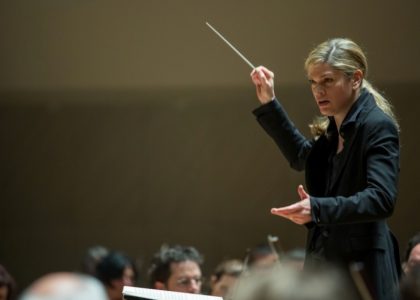 This concert is dedicated to Mstislav Rostropovich (1927–2007), a legendary cellist, the world-famous musician and humanist, a long-time friend and colleague of Lithuanian musical community. Rostropovich could deservedly be called the godfather of the Vilnius Festival, which was launched on June 2, 1997 with the LNOBT’s ballet Romeo and Juliet under his baton. Rostropovich and Lithuanian musicians enjoyed a special comradeship. Before emigrating from the USSR, he often performed in Lithuania: in the beginning of the 1980s he conducted Tosca at the LNOBT (with V. Noreika and G. Vishnevskaya), in 1991 he led the Lithuanian Chamber Orchestra in Spain. Having initiated a charitable concert in support of Lithuania’s independence, he said: ”Everything associated with Lithuania is dear to me”. On his visit to already independent Lithuania Maestro gave a concert with Washington Symphony Orchestra in the LNOBT on October 2, 1993; the following year organised the tour of the LNOBT’s group in Germany; in 1995 he was the soloist in Dvořák’s famous Cello Concerto at the Lithuanian National Philharmonic Hall; in 2001 he conducted the LNSO in the programme dedicated to the 125th birth anniversary of M.K. Čiurlionis at the prestigious Théâtre des Champs-Élysées in Paris.

Tonight we will meet clarinettist Žilvinas Brazauskas, the Mstislav Rostropovich Charity and Support Foundation scholarship holder (2007–2011), a winner of national and international competitions, and participant of various festivals. The podium will be graced by Canadian conductor Kerri-Lynn Wilson, former assistant to the legendary baton master Abbado in Salzburg Festival, and conducting fellow at the Tanglewood Music Center.