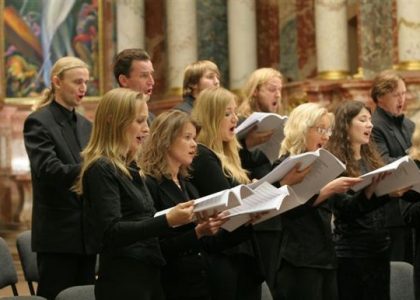 by Chiara Margarita Cozzolani (1602–1678). Concert for the 400th anniversary of the beginning of the building of St. Casimir’s chapel

In the first half of the 17th century, seventy-five percent of upper-class women from Milan took vows in order to become nuns. Chiara Margarita Cozzolani was one of them. As a gifted and well instructed musician, she had high chances for a musical position in the convent, even in S. Radegonda, which was famous for the level of musicianship it offered, as well as for its choir, which was considered the best female choir in Italy and which attracted audiences from near and far. Cozzolani will soon bring even more prestige to S. Radegonda, by being not only an accomplished singer but also a prolific composer of motets, psalms and scherzi musicali.

Her Vespers volume was published 1650, right before the crusade launched by Archbishop Alfonso Litta against music practice and education in church, and it gives a glimpse into the reality of music education, activity and creativity of women in the 17th century, as well as into the glamorous practice of the music written by nuns for nuns in that time.